Last Friday brought an end to the first week at my new job, and what a wonderful and crazy week it was. Admittedly, I arrived bright and early on Monday morning to an empty office, as there was some rearranging of space and furniture being completed. By mid-morning, though, everything was moved from the hallways into my private space, which is as different from the bullpen as could be. Soon after, things started to fall into place, as my computer was set up, I unpacked, I was thrown into several meetings, and I was given my first several projects, one of which had with a tight 1-week deadline. Tuesday was more of the same, as I tried to get my footing under me, meet my new coworkers, and figure out where the cafeteria was located. Thankfully, Wednesday was a federal holiday, so I had a chance to recuperate. By the time Thursday and Friday rolled around, I was making significant progress on the project, settling into my new space, and running full-steam ahead. By the end of the day on Friday, I was happy, but exhausted, so I made the predictable end-of-week stop at our local pizza place before heading home and opening one of the bottles of Chianti that I received earlier in the week from Ruffino Vineyards. 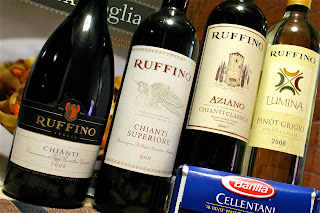 Now, I must admit that the Ruffino sample package is one of the best that I’ve received. Not only did it include 4 wines (3 Chiantis and 1 Pinot Grigio), but also it included, Pasta Sfoglia, an Italian cookbook by Ron and Colleen Suhanosky, and a box of pasta. The cookbook, which sells for $18 on Amazon, but is listed at $30 inside the book flap, doesn’t assume that you have any knowledge on how to cook Italian food, which is helpful; however, it does assume that you have some cooking talent, which may present some difficulties for me. I’m going to try, though, because as Hubby and I sat on the couch reading the recipes, we were practically drooling on the book. Pasta Sfoglia starts out with a description of pantry essentials and directions on how to make your own pasta—everything from the traditional egg pasta to the less traditional sweet potato gnocchi. From there, the book builds on the Italian cooking experience with recipes like the less complicated Fettuccini, Lemon Cream, and Toasted Almonds on page 34 and the more complicated Goat’s Milk Cheese, Pumpkin, Cannelloni, Béchamel, Pumpkin Seeds, Breadcrumbs on page 121, both of which can be made with the fresh egg pasta, obviously. The pictures themselves are inspiring, as all of the food looks absolutely scrumptious. I will have to try one of the dishes with one of the other bottles of Chianti, though, as there was definitely no way that I was cooking last Friday. 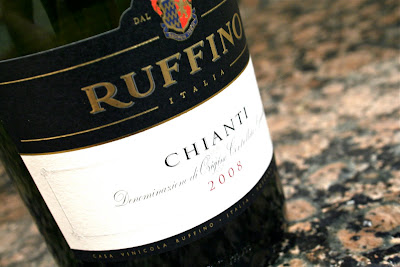 The 2008 Ruffino Chianti (vineyard, snooth) was a bright, but deep ruby. On the nose, there were cedar, ripe cherry, and black pepper aromas, followed by the slightest hint of violets. In the mouth, there were big, Bing cherry flavors, followed by black pepper, rose petals, and tobacco. The Chianti had a high acidity, low tannins, and a light-to-medium body.

Is this worth a glass after work? Sure…you won’t be drinking anything out of the ordinary, but you’ll definitely have a decent, reliable glass of wine. At $9, which is the suggested retail price, this wine was perfect for a relaxing evening of talking with Hubby over mozzarella sticks and a pepperoni & sausage pizza. The high acidity in the wine actually helped cut down some of the grease from the sticks and pizza, while matching nicely with the acidity in the tomato sauce. After dinner, I continued to enjoy the rest of the bottle over a trashy vampire novel, which also made for a great pairing.