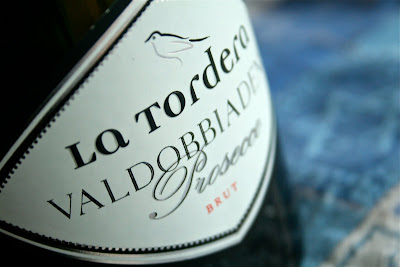 Last Monday was the beginning of a slower period at work, which, I admit, was a huge relief. I’m not entirely sure how I started a new job and immediately felt like I had fallen behind in my work, but that’s exactly what happened. Thankfully, with things slowing down a little, I finally had the time to start playing catch-up. By the time I left work on Monday night, I was feeling like I’d accomplished a lot and that I was ready to go home and put the finishing touches on my take-home final before lighting the Chanukkah candles, tasting the last bubbly to try before my condo association’s holiday Bubbly & BBQ Bash, and enjoying a nice dinner with Hubby.

The La Tordera Valdobbiadene Prosecco (winery, snooth) was almost clear, it was such a light, straw yellow. The bubbles in the glass were big, bountiful, and beautiful. On the nose, there were grapefruits, lemons, and yeast, followed by a touch of white peaches and white flowers. In the mouth, there were slightly under-ripe white peaches, lemons, white blossoms, and a hint of nectarines on the finish. The sparkler had a nice, crisp acidity and a light-to-medium body.

Is this worth a glass after work? Definitely! If you see this wine in the store, grab it; you won’t be disappointed. At $18, this Prosecco was surprisingly complex, fresh, and fruity. I enjoyed drinking it on its own, but when I paired it with flounder stuffed with spinach and feta, it was absolutely gorgeous. I admit that I didn’t end up using this sparkling wine for the Bubbly & BBQ Bash, but that was because it was a little harder to find than the Canella Prosecco di Conegliano, which I ended up using because I really wanted to provide sparklers that could be easily purchased. That said, if you see the La Tordera, don’t pass up the opportunity to taste it. It will be the perfect addition to any brunch, particularly mixed to make a Bellini/mimosa, or to a relaxing evening after a hard day of work. A special thanks to Schneider’s of Capitol Hill for recommending this great wine.