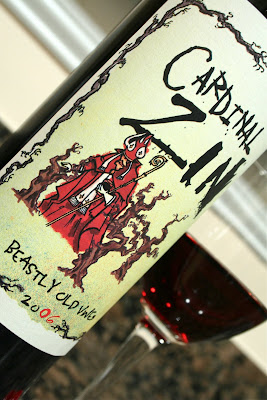 Originally, I was hoping for a quiet final two weeks at my current job. There are a couple of projects that I want to finish out, but otherwise, my plan was to spend the time getting things in order for my replacement. My predecessor put together an incredibly helpful document before she left. It outlined all of the projects that she was working on before she left and one what projects were likely to come up over my first year, along with commentary on how my boss felt about each project. It was invaluable, and I was hoping to create a similar one before I go. So far, though, I haven’t even had a chance to think about it. Tuesday, for example, was packed with back-to-back meetings, emergency emails, and phone calls that needed to be returned. I ended up staying late again, and by the time I finally left, I was exhausted. That said, I wasn’t too tired to enjoy the couple of little kids wearing Halloween costumes on the Metro. Their ghoulishness reminded me that I had two bottles of wine that I specifically bought for Halloween waiting for me when I got home. While I try to pretend that I’m not a sucker for a good wine label, over the weekend, I couldn’t resist buying wine that I thought fit with the spirit of holiday, and Tuesday was the perfect night to start getting into the mood.

The 2006 Cardinal Zin (wine group, snooth) was a medium ruby color with flecks of garnet, particularly on the rim. On the nose, there were aromas of black cherry, blackberry, and dried tea leaves. In the mouth, there were blackberry, sour cherry, smoke, cloves, nutmeg, and ginger flavors, with a hint of burnt match on the finish. The wine had low tannins and very high acidity. 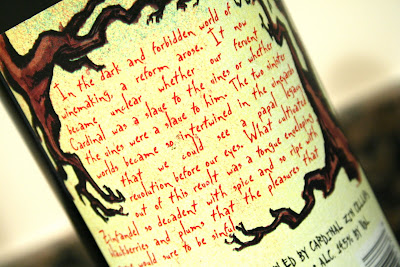 Is this worth a glass after work? Eh…if you have a bottle on hand, drink it, but I wouldn’t go searching it out either. At $17, the Cardinal Zin offered a fun, spooky label and a somewhat soulless wine. It had the berry flavors that I expect in a Zinfandel, but without the jamminess that I love. I tried drinking the wine on it’s own, and it lacked the special something that makes me want to go back for a second glass. I paired the wine with some grilled chicken, as that often is a pairing that brings out the true character of a Zin, but the match just didn’t do it for me. Don’t get me wrong, this isn’t a wine that I would dump down the sink, but it’s not a wine that I would search out either. That said, several bloggers that I highly respect and normally agree with, such as Wine Harlots, had a different experience, so not everyone shares my lack of enthusiasm. That difference in wine preference is part of what makes the wine world go round.